First,  just a small bit of introduction before we get things underway. Top 250 Tuesdays is my attempt to wend my way through the Sight and Sound Top 250 Greatest Films list. Basically, for me it’s a way of exploring what are considered some of the all-time great movies, in an attempt both to broaden the scope of my viewing and to fill in a number of gaps in the movies that I probably should have already seen, or even revisiting some old favorites in a new light A couple of notes, however, before we get started. As you’ll note at the top, this says #005. that’s actually noting that this movie is number five on the list, not that this is the fifth entry into the series. I decided to do it this way because I don’t intend to just go up (or down) through the list. Instead, I’ll be jumping around, sometimes just picking a number at random and watching that one, sometimes picking a movie based on other considerations. Also, I’m not planning for these write-ups to be reviews per se, though of course, in writing about them, I’m sure you’ll be able to get a feel for how much I liked or disliked a particular movie, nor do I intend to feed you a lot of Wikipedia or IMDB style information about the movies – obviously, you can find that type of information in any number of places. Of course, there will be times when background and context is important for getting a feel for some of these films, especially the older or less familiar ones, but generally I intend to keep that kind of thing to a minimum and just stick to my reactions or thoughts on the movie. After all, hopefully that’s what you’ve come here to read. For a longer introduction and a look at the entire list of films in the top 250, you can find that here. Okay, with all of that out of the way, let’s get on with it. 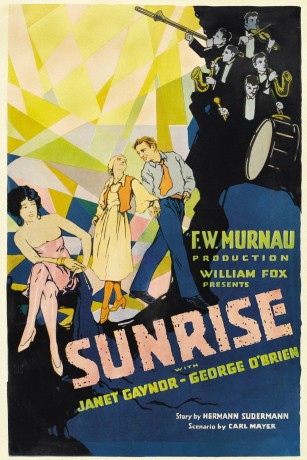 So I’m starting this off with the movie that ranked number 5 on the list, F.W. Murnau‘s 1927 silent masterpiece Sunrise which is subtitled A Song of Two Humans.

Obviously this is a well-loved film, and it’s very easy to see why, as it really is an exemplar of all that can be great about silent films. Murnau and his cinematographers Charles Rosher and Karl Struss bring every bit of skill that they had previously developed to this adaptation of  Hermann Sudermann‘ s story “Die Reise nach Tilsit” (translated, “A Trip to Tilsit”).  This is a film that is beautiful in every way, and it’s easy to see why Sunrise was honored with three (of only 12 given) Academy Awards at the first awards banquet in 1929 – Best Actress in a Leading Role for Janet Gaynor, Best Cinematography for Rosher and Struss, and Best Unique and Artistic Production (the only time this particular award was given, and considered second only to Outstanding Picture which was given to Wings).

Simply put, there is a lot to love about this picture. Murnau. of course, brings a lot of German Expressionism to the film, from particular lighting (and lighting effects) in certain scenes, to Dutch angles and tilted walls and floors which enhance the incredibly atmospheric mood – particularly in the first act of the movie and in it’s near-tragic climax. Even the acting at times is much more reflective of the German or European style in vogue at the time than that generally seen in American films.

Murnau also uses an incredible number of longer takes in the film, where he will hold on a particular moment or use a tracking shot that follows one particular character much longer than most of his contemporaries would, and in a way that would probably have many modern movie-goers, used as they are to quick takes or multiple angles, squirming in their seats. It’s obvious that Murnau wants his camera (and thereby the viewer’s eye) to linger upon certain scenes, taking in everything that is being presented upon the screen.

And there is a lot of information presented in a number of different ways in various scenes of the movie. Again, Murnau reaches deep into his bag of directorial tricks, using overlapping frames, various dissolves, and even the title cards in ways that never seem intrusive or simply to be there for a “see what I can do” effect, but actually serve the purpose of the story. Plus, they are all apparently done in camera.

There is also a definite sense of the proto-noir about the first act of this film. Watching it unspool and seeing the use of light and shadow and the increasingly downward spiral of our protagonist, along with the influence upon him of Margaret Livingston’s siren-like Woman from the City, one almost gets the same sense of inevitability in the downfall of The Man that pervades the best films noir.

Ultimately, however, the Man does manage to both fight off the influence of the Woman and go on to redeem himself, and that is where the subtitle of the movie comes in. The movie is called A Song of Two Humans, and that is incredibly fitting, First off, if ever a film could be called a visual song, it is this one. It has a strong melody that wends its way through the entirety of the film, full of ups and downs and highs and lows, and the incredible editing and in-camera effects that Murnau and his collaborators pull off harmonize so well with the rest of the film that there really isn’t a more apt description.

The second part of the subtitle is also incredibly fitting, as Murnau has intentionally given his characters no actual names, but simply calls them “The Man”, “The Wife” “A Woman from the City”, etc., not to make them generic and faceless, but to make them universal and even more easily related to, as they could be any people anywhere. The same is true when it comes to the decision to replace the name of the town in the story, Tilsit, to simply “The City”. This simple replacement easily changes the focus of the allure from “What’s so special about Tilsit that it draws these people to it?” to something that many more people can relate to, which is simply the allure of the big city, or even just that of another place.

As I said at the top, this is a film that is beautiful in so many ways (I haven’t even commented upon the acting of our three leads, but let’s simply say that they are perfectly cast, and play their roles exceedingly well, nor upon the musical score which is rich but never intrusive), and it’s easy to see why this movie is so highly ranked in the poll. For those who love silent films, it is definitely a must-see, and even if you don’t think you do, well, for some there will probably be no convincing ever, but if there were ever a movie that could make you a convert, this is likely to be the one. For those of you who do want to watch it, I’ve actually embedded the entire movie below. It’s also available on an excellent Blu-Ray/DVD combo pack as part of the Masters of Cinema series.

So, there we go. One down and only 249 to go. Fortunately this little journey of mine is off to a great start. Next up? Well, we move to a more modern and color-filled film that was actually part of a trio of movies that introduced me to one of my favorite foreign directors, and is one that I’ve been looking forward to re-watching  for a long time. Which one is it? You’ll just have to head over to the Facebook page to find out.

Until next time, happy viewing!