So last week we looked at The Lone Ranger, one of the longest-running series to air during what is known as The Golden Age of Radio, and this week we move to a series that had a considerably shorter life span, but has had perhaps at least as much cultural impact – or at least one of its episodes did. 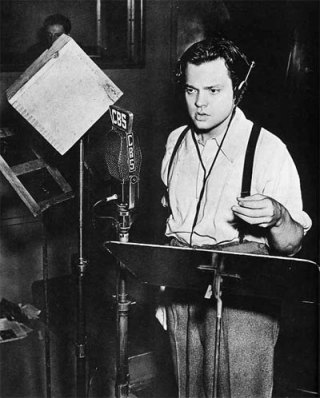 The Mercury Theater On The Air actually began its life as First Person Singular. The series was created as a showcase for Orson Welles and his Mercury Theater troupe, and featured adaptations of classic works of literature. Welles, of course, played the lead in each show, and often also portrayed other characters as well. This was often the case with a radio show like this, where one actor would portray more than one character, since, as long as the voice was different, the listening audience would readily accept the illusion, if they were even aware of it.

The show is what was known as a “sustained” series, meaning it was carried and payed for by the network, in this case CBS, without a sponsor and without commercials. This was often done in early radio, when the network would want to go ahead and give a show a tryout, in hopes that they could attract a lucrative sponsor. In the case of the Mercury Theater, the show was given an initial 13 episode run. The first show was broadcast on July 11, 1938, and starred Welles in the title role of “Dracula”.

Other early shows included adaptations of “Treasure Island“, “A Tale of Two Cities“, “The Count of Monte Cristo“, and” Julius Caesar“.

Of course, it’s not those shows, good as they are, that made the series so famous that it is even today the stuff of radio legend. No, that can be pinned down to one episode in particular, the show that “panicked a nation”. The night was October 30, 1938, the night before Halloween, and as a nation tuned in to CBS, they heard…

Much has been written about that broadcast, and many theories have been presented as to the actual reasons for the “panic” and just how great it was. That’s all information that can easily be found elsewhere, and it was even dramatized on a 1957 episode of Westinghouse Playhouse One which is notable in itself for appearances by Alexander Scourby, Ed Asner , Warren Oates., John Astin. and James Coburn (making his television debut).

Two things, however, can’t be denied. The “War of the Worlds” episode made a star of the young Welles, and it got the program a sponsor. The week after the initial 13 episode run concluded (with an adaptation of Thorton Wilder’s “The Bridge of San Luis Rey”), it returned as The Campbell Playhouse, sponsored by Campbell Soups, and would run under that title for another three years.

That, however, is another show for another day. For now, I’ll just leave you with some of the other adaptations that were done under the Mercury Theater banner. Enjoy!

First up, John Buchan’s “The 39 Steps” (yes, this is the same story that Alfred Hitchcock had turned into a film in 1935.)

Next, here’s “The Count of Monte Cristo”:

“The Man Who Was Thursday” by G.K. Chesterton

And finally, Robert Louis Stevenson’s “Treasure Island” in which Welles plays both the adult Jim Hawkins and the famous pirate Long John Silver.

As always, I hope you’ve enjoyed this little trip into radio’s past, and will come back next week when a famous Hollywood Duo will strike out on a very Bold Venture.