Continuing to wend my way through the Sight and Sound Top 250 Greatest Movies of All Time. This week, it’s #166 on the list, Carl Theodore Dreyer‘s Vampyr. For a longer introduction and a look at the full list, just click here. And if you want a heads-up on what I’ll be watching for next week in case you want to watch along, just head on over to the Facebook page or follow me on Twitter (both of those links are in the sidebar) where I’ll be posting that info later in the day.

It’s easy to imagine why audiences in 1932 had such a hard time accepting Carl Theodore Dreyer‘s Vampyr. Even today, it’s more the atmosphere of the movie, with it’s very odd use of shadow and overlapping images that makes it a standout, but it can also be very off-putting. This is very much a film filled with the diabolical, where shadows exist seemingly on their own; where time seems to run at it’s own pace, sometimes too slowly, sometimes too quickly, sometimes even backwards; where logic often does not pertain, and the very idea of cause and effect is completely thrown out the window. In short, it is a film that is designed not so much to terrify as to disturb, and it is one that succeeds very well at doing just that.

Coming off of his 1928 masterwork The Passion of Joan of Arc, Dreyer was already an acclaimed director who was obviously looking for something completely different to turn his attention to, and for new ways to challenge his skills. With this in mind, he decided to turn to the field of horror to see what tales he could use to give audiences a chilling sensation. Eventually he decided to turn to a collection of short stories by Sheridan Le Fanu called In a Glass Darkly. From that book, he decided to incorporate two stories into his film: “Carmilla“, and “The Room in the Dragon Volant”. 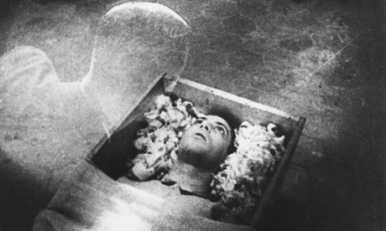 Though it’s easy to see the influences of both of these stories in Vampyr, it really can’t be cosnidered a straightforward adaptation of either. The former story is one concerning a lesbian vampire, and the latter being about a premature burial, there are elements of each contained within the film, but it definitely tells a tale all its own.

I’m not going to talk much more about the plot, because you can easily find that outlined elsewhere, and anyway it doesn’t seem that Dreyer was as interested in telling any kind of straightforward narrative (which is not to say that the movie doesn’t have one, it does) as he was in creating a tone – an atmosphere – which audiences then seemed to have a very strong negative reaction to, and which even now can give the casual viewer pause.

Dreyer is definitely on his “A” game here, as he brings a definite experimentalism to the film. Coming in at the very start of the “talkie” era, he has created what is largely a silent film, still relying very heavily on title cards and pages from a book on vampires to explain much of the backdrop and lore that he is using and to explain the nature of the creatures, and dialogue is sparse throughout. Once again, however, this is not a problem, because it is the imagery and atmosphere that is his obvious concern.

What makes the film even more interesting is that even though Universal’s much loved adaptation of Dracula had been released a year before this film, the location shooting and camera tricks that Dreyer utilizes manages to make its filmic predecessor just seem that much more stage- and hide- bound. (Of course, when Browning’s adaptation of the stage play is put to shame even by the Spanish-language version that was shot on the same sets at at night, that may seem less of an achievement, but still it does show that even that early on, film audiences were much more likely to turn to the familiar than the experimental, something that rings true even today.

All in all, at the end of the day what comes across is that Dreyer has given us a very successful, creepily atmospheric film of the type which, if given a chance and a proper re-release, I think could even give the right audience today a case of the shivers.

There don’t seem to be any real trailers for the film, but here’s just one of the many chilling sequences that can be found within it, which should give you a good taste of just what I’ve been talking about:

So what are your thoughts on Vampyr? Is it a movie that you’ve seen or would like to? If you have seen it, is it one that would make your own Top 10 list? Or would it not even crack your Top 250? Let me know below.