Continuing to wend my way through the Sight and Sound Top 250 Greatest Movies of All Time. This week, it’s #065 on the list, Charles Laughton‘s The Night of the Hunter. For a longer introduction to this series and a look at the full list, just click here. And if you want a heads-up on what I’ll be watching for next week in case you want to watch along, just head on over to the Facebook page or follow me on Twitter (both of those links are in the sidebar) where I’ll generally be posting that info later in the day. 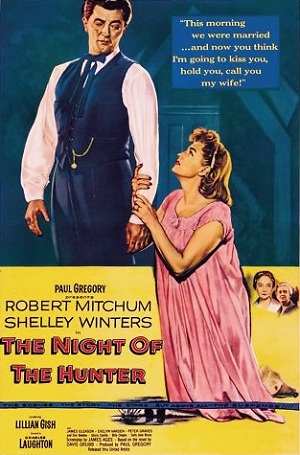 I’ve mentioned it before, but it bears stating again in conjunction with Charles Laughton’s film The Night of the Hunter. One of the reasons that I started this particular exercise, and one of the interesting challenges that it represents is exploring just what it is that raises a movie beyond being considered “good” and places it into that rarified atmosphere of being considered one of the all-time greats.

For me, The Night of the Hunter is one of those films that definitely begs that question.

Okay, here’s the thing: Night of the Hunter was a first time directorial outing for celebrated actor Charles Laughton, and unfortunately, to me at least, it feels like a first time job.

Yeah, I know, it’s celebrated largely for its integration of a lot of different influences, and also for the influence that it had on later American cinema. And I’m not really here to dispute that. Certainly, Laughton’s influences can be seen in the film. There are the various nods to German Expressionism, the “closing iris” shot, the panning wipes, the film noir shadows, the masterful shot of Shelly Winters surrounded by a halo of light just before her murder, the somewhat oblique shot with the various animals in the foreground as the kids are travelling down the river, etc., etc., but they all seem to be thrown in more as Laughton saying “Ooh! And I want to do this!” than for any other reason. They seem to be more in service to the director than they are to the story he wants to tell.

For example, that “closing iris” shot that I mentioned? Yeah, it’s there, but what does it actually close in on? Unless I missed something, it basically ends with its focus on Robert Mitchum‘s butt as he is walking away from camera, rather than anything that actually deserves the focus. (My apologies to anyone out there who might be a fan of Robert Mitchum’s butt and feels that it always deserves to be more focused on, but since it’s covered by that long coat anyway, well…)

In a lot of ways, to be honest, the film reminded me a lot of some of the worst of Quentin Tarantino‘s excesses when he, too, can’t help himself but to throw every influence he can think of into a film.

Laughton also commits a number of other “first timer” sins, such as having his actors looking directly into the camera when they are supposed to simply be delivering lines, and not necessarily breaking the “fourth wall”.

There are also some serious problems with the basic story-telling in the film. We are given next to no explanation of just how Mitchum’s character Harry Powell knows just where (or even in which direction) to look for the children, nor where they have stopped. Also, I couldn’t help but wonder why, when the children are holed up in a barn and see the silhouette of Mitchum seemingly passing them right by, John suddenly decides that rather than continue to hide there, he and Pearl must jump into their boat and immediately continue their journey.

Then, when we get to the end, and have the final climactic confrontation(s) there are a number of questions that are seemingly left unanswered. What exactly wound up happening to the money? How did the townsfolk (many of whom were completely taken in by “the preacher” beforehand) suddenly find out about his past? What was the actual outcome of the trial and Mitchum’s final fate? Sure, there are implications, but again, unless I missed the actual explanations, these questions are never actually answered,

And yes, though I hesitate to even ask, since the image of the LOVE and HATE tattoos on Mitchum’s hands is rightfully iconic, does the actual story that he tells using those tattoos really make any sense at all, or are the townspeople (and supposedly we as an audience) supposed to be simply so overcome by the sheer charisma of Mitchum’s (or perhaps, Powell’s) performance that it really doesn’t matter? 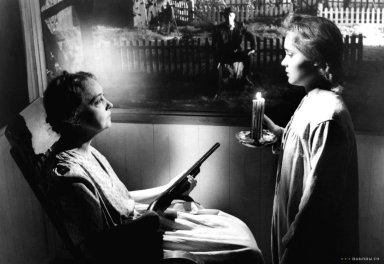 Now that’s not to say that the movie doesn’t also have a lot going for it. One thing that Laughton does get extremely right is pulling some wonderful performances from his actors. Mitchum especially embodies the sheer lunacy of Harry Powell in a way that perhaps no one else could, all the way from his opening monologue (or, since he is supposedly having a conversation with God, should that be dialogue?) to the very end, and the rest of the cast is also for the most part spot-on. I’d suspect that comes from Laughton, as an actor himself, being able to relate to and communicate with his cast to get the most out of them.

In a way, it’s a shame that Laughton was so disheartened by the initial reception of this movie that he never went on to direct another film, because I do get the feeling that with more experience, and especially having gotten to use all of those tricks that he wanted to in this film, he could have found a voice that was truly his own and gone on to make a really great film.

Unfortunately, for me at least, that film just isn’t this one.

So what are your thoughts on The Night of the Hunter? Is it a movie that you’ve seen or would like to? If you have seen it, is it one that would make your own Top 10 list? Or would it not even crack your Top 250? Let me know below.