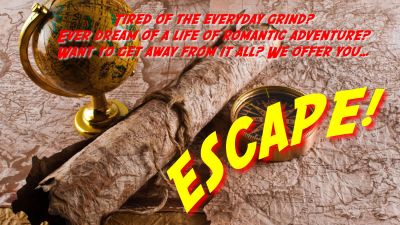 Last week in writing about the long-running CBS series Suspense, I mentioned that in its later years the show often reused scripts from its “sister show”, Escape, so it only seems appropriate to follow that post with a couple devoted to that show. So, much like I did with Suspense, this first post will simply be a sampler of some of the shows from the series, and I’ll be back next week with more info and more shows.

So, if you’re “Tired of the everyday grind? Ever dream of a life of romantic adventure? Want to get away from it all? We offer you… Escape!”

Until next time, as always, Happy Listening!