Continuing to wend my way through the Sight and Sound Top 250 Greatest Movies of All Time. This week, it’s #180 on the list,  Alfred Hitchcock’s Notorious. For a longer introduction to this series and a look at the full list, just click here. And if you want a heads-up on what I’ll be watching for next week in case you want to watch along, just head on over to the Facebook page or follow me on Twitter (both of those links are also in the sidebar) where I’ll generally be posting that info later in the day. 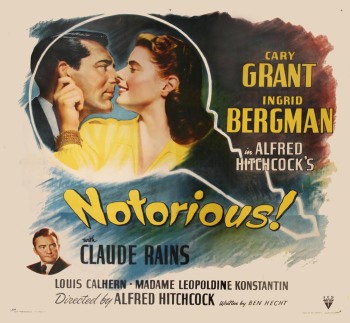 So  in writing about today’s entry into the Sight and Sound Top 250 line-up, Alfred Hitchcock’s Notorious, one has to consider what can only be termed the “Hitchcock problem” which is somewhat inherent in any poll like this, and especially in one that produces such a large list of films.

Simply put, the problem is an overabundance of truly excellent films to choose from.

Yeah, it may perhaps seem strange to consider this a “problem”, but…

Here’s the deal from my perspective: Hitchcock directed so many truly great movies over the years that there’s no way that anyone can possibly make a list of “Greatest Movies” without including him somewhere on the list. Well, that’s not quite true, I suppose. One could certainly make such a list, but the exclusion of Sir Alfred would have to be purposeful and mostly an exercise not just in trying to be non-conformist, but also in denying an truly great director his place in the film-making landscape.

So then the question really becomes two separate ones. It’s not so much “does Hitchcock get a place on my list”, but “how many places?” and “which Hitchcock”?

Obviously, the consensus answer to the second question at least in 2012, the year this version of the poll was released fell to Vertigo enough times that it actually managed to displace Citizen Kane from it’s long standing place in the top spot of the list. Is it really the best film Hitchcock made in his long career? Personally, I’d argue no – my vote goes to Rear Window, which has become my go-to answer when anyone asks me for my all-time favorite movie, if for no other reason than one has to have an answer to that question readily available, and I think it goes a long way towards being Hitchcock’s best and certainly a good way to open the discussion – but at that point one truly gets into personal preference, which, in the end is where these lists are finally built anyway. 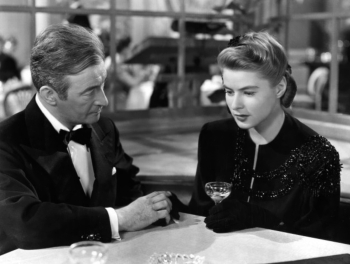 As far as the first question above, that of how many places one allows for Hitchcock films, well, that’s not one that I’m really looking at to answer numerically, but rather I bring it up in order to point out that I think it’s that question that places at least five different movies from the director’s filmography on the list, and finds (or perhaps makes?) room for a movie like Notorious on it.

Make no mistake. Notorious is an excellent movie, and if it were made by anyone other than Hitchcock it could easily qualify as a director’s greatest work. However, when placed within the scope of this particular director’s achievements, one has to wonder in a way if it simply doesn’t pale in comparison.

Again, another aspect of the “Hitchcock problem”: when a director has made so many movies that could be considered other directors’ best work, how does one deal with those which are simply “great” but not “the greatest” in compiling a list like this? 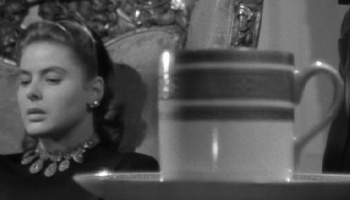 Okay, so I’m six hundred words into this, and i really haven’t even gotten to the movie itself, but I suspect you’ve likely already picked up in the comments that I’ve made my response to it. Simply put, Notorious is an excellent film from an excellent director that, while it may not be his very best certainly shows why he has to be considered as one of the most elite film-makers of all time.

It’s a movie that showcases a number of Hitch’s favorite tropes – especially that of a relatively “common man” (though in this case the “common man” is female) caught up in unexpected circumstances beyond their experience or control. In a way, one could actually consider it largely a gender-swapped version of North By Northwest – which, just by the way, also appears on the list at number 54.

It also is a movie that shows why the director is so highly ranked among his peers as it contains a number of unique camera angles, editing decisions, and shot set-ups that showcase a great dramatist at the height of his game.

And finally, it is a movie that – no matter how various actors may have responded to their treatment by Hitchcock both on and off screen, and his reported attitudes toward those who worked under him, once again simply shows just how good he was at pulling quality performances from not only his stars – Cary Grant, Ingrid Bergman, and Claude Rains all shine here – but from those who are also simply there to help populate his films.

In other words, yes, Notorious really is a great film which deserves its place on the list, and one which I highly recommend not just watching, but seeking out if you haven’t seen it already.

And that’s an evaluation I have no problem making at all.