Continuing to wend my way through the Sight and Sound Top 250 Greatest Movies of All Time. This week, it’s #015 on the list,  Yasujirō Ozu‘s Late Spring. For a longer introduction to this series and a look at the full list, just click here. And if you want a heads-up on what I’ll be watching for next week in case you want to watch along, just head on over to the Facebook page or follow me on Twitter (both of those links are also in the sidebar) where I’ll generally be posting that info later in the day. 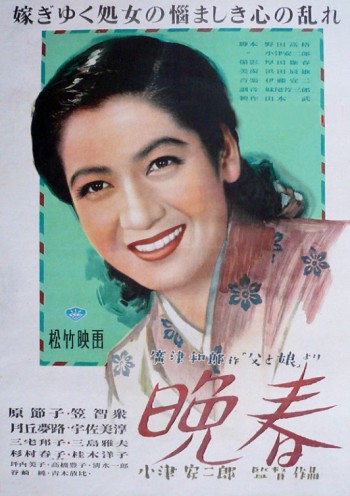 Here we are with a third week spent looking at Yasujirō Ozu’s Late Spring. In case you missed the first two parts, you can get caught up by clicking here for part one and here for part two.

Last time out I spent a lot of time writing about the performances that Ozu was able to get from his various actors, and my feeling that that alone would not only place him very high on the list of master film makers and certainly earn this film its place high on the list of greatest movies of all time. (Just as an aside, by the way, this movie is actually not even Ozu’s top-ranked film on the list, with that honor going to the director’s Tokyo Story, which sits at number 3, and which having now watched this movie I can’t wait to delve into.)

Nonetheless, there aree still a couple of other aspects of this work which speak to both the director’s style and his editing choices that I feel I would be remiss not to touch on, and which inform the structure, design, and themes of the film, while at the same time raising questions of their own.

The first of these is the choice of scenes that Ozu chooses to include and in one particularly striking case, all things considered, not to include.

The first of these choices comes right at the beginning of the movie, where we spend what seems at first like a much longer than needed time at a tea ceremony which, while it does serve to introduce the characters of Noriko and her aunt, does absolutely nothing to actually forward the plot at all, nor does the film ever directly return to this scene nor even reference it again. One might even question then not only the reason for the length of time te director spends on this scene, but even its inclusion in the film in the first place. 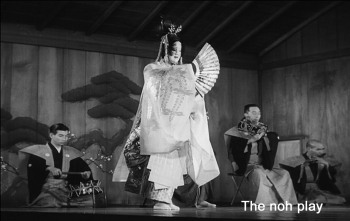 In my mind, however, it does actually serve a very practical purpose when it comes to establishing the atmosphere and main conflict of the film. If one takes the main thrust of the movie as not so much being a straight forward will she or won’t she (Noriko) accept the notion of agreeing to an arranged marriage that she is actually opposed to and more about the tension between traditional ways of doing things and those of a more modern world beginning to insinuate themselves into Japanese society, then it is important for Ozu to spend this time establishing those transitions and the pleasure that Noriko takes from being a part of them.

Even more questionable, perhaps, is the amount of time that Ozu chooses to spend on three other activities which take place outside the Somiya home and indeed again outside the direct narrative thrust of the film. These are the play attended by Noriko and her father, a concert at which Noriko is not even present, and a bicycle ride taken by Noriko and her friend Hattori (who is also the Professor’s assistent) which at first makes it seem as though he might be a potential love interest until it is revealed that he is already engaged to someone else, a fact that Noriko is aware of, but many of the other characters are not. 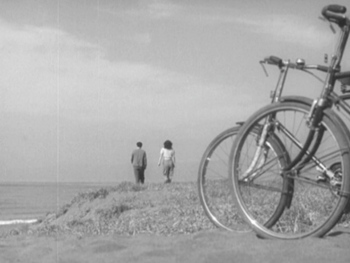 Again, however, as one considers that the real intention of Ozu’s work is not necessarily to simply keep his actually rather thin plot moving forward but to consider the implications of it and the tensions that it creates not only for this one family but for broader Japanese society, it becomes apparent that these scenes are actually quite important as they again highlight the tension between the old world and the new and how each impinges on the other.

In contrast to these scenes, which may seem overly long in a casual viewing, Ozu also seems to make an odd choice in never actually showing any scenes at all taking place during Noriko’s wedding instead jumping from directly before the wedding to scenes taking place afterwards. Of course, this can partly be marked as an accession to Japanese censorship rules at the time, which forbade such scenes (actually, even the discussion of traditional marriage was against the strictest interpretations of the rules), but one suspects perhaps that even had this not been the case, Ozu would not have spent any time at all on the ceremony, because, again, while perhaps it might be seen a central to the plot of the movie, it is actually of little import to the discussion that Ozu is interested in fostering with his audience. 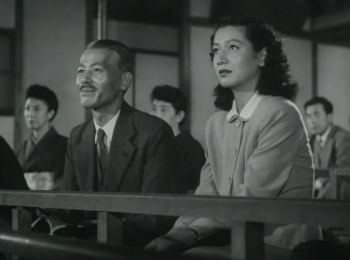 Finally, in keeping with the idea of choices that Ozu, as director, chooses to make as far as what to include and where within the film they should go, there are a number of shorter shots, some of them of seeming irrelevance, which are scattered throughout Late Spring.

First, allow me to take this particular moment to acknowledge the expert camera work of Ozu’s cinematographer Yuuharu Atsuta. These shots, along with the entire rest of the film, are strikingly composed and gloriously shot, and they truly make the most of and showcase the glorious palette that can be achieved even without the use of color. It actually feels throughout the film that the addition of color would be more of an intrusion than an enhancement.

That said, there is still the question of why Ozu decided to include these shots in the first place. I suppose some of them could be written off as simply giving the viewer a sense of place and the surroundings within which his narrative is taking place, though none of them really seem to serve the purpose of a traditional “establishing shot”. Instead, while at times these so-called “pillow shots” can be seen as transitional either in time or space, at times they also seem almost intrusive. 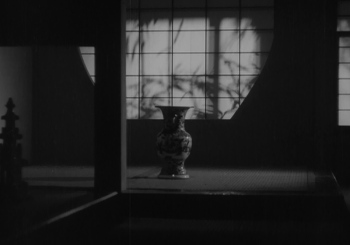 Perhaps the most famous of these, and the one which has certainly generated the most discussion, is the vase shot which occurs during Noriko and her father’s last trip to Kyoto. Just as the pair is settling down to sleep, the director takes the focus away from Noriko to include what seems to be a random shot of a large vase and the window behind it, returning a few seconds later to Noriko who has a different look on her face. After a moment focused on her, the director again returns his eye to the vase, but this time, instead of following it with another shot of his protagonist, he uses the shot as a transition to the next day.

As I noted above, this sequence is one of the most questioned and discussed not only within Late Spring, but within the director’s entire career, and while I won’t, at this point, venture my own opinion, leaving that to those who have spent more time with and have much more familiarity with and immersion in the director’s techniques, I will simply note that even though again, it may seem a random thing to include considering the situation, it is done with such skill and such perfect timing that it doesn’t come off to the viewer as intrusive at all, but instead seems somehow fitting within the overall experience of watching the film. 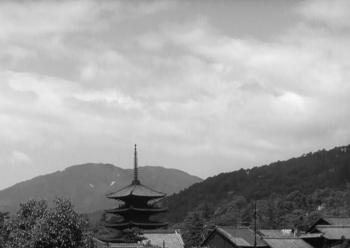 Which, I suppose, after all these words, seems a fitting point at which to end this particular write-up, because it neatly sums up everything that makes Late Spring and its director great and definitely worthy of its high place on this list of all-time best films. As I said at the start, this work is a true masterpiece which showcases a master film maker making the most of his creative power. It is both gorgeous and thought-provoking in the way that only the best films are, and is one of the reasons that I’m truly glad that I decided to embark on this journey through this list, because without it, Ozu might well have remained a name that was always on the periphery of my viewing experience, but never truly a part of it. Instead, now that I’ve had a taste of his work, had my palate expanded as it were, I find myself quite eager to delve further and see what else he has to offer.

Again, rather than an outright trailer for the film, here is a clip of the nih play scene described above: