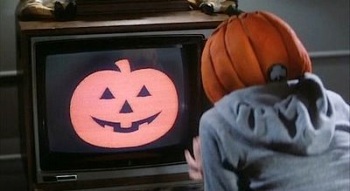 Tomorrow is Halloween, and, like many holidays, Halloween means Halloween specials on television. Whether it’s an actual special such as 1966’s It’s the Great Pumpkin, Charlie Brown or just a Halloween-themed episode of an ongoing series, the celebration of all things spooky has probably been a part of television ever since the medium has existed.

So today, instead of a look at one particular series or episode, I thought I’d pass along a little treat in the form of a celebration of some of these classic Halloween specials.

(Of course, I suppose I should give you fair warning that there might be a trick or two in here too. But which is which may only depend on your particular taste.)

Also, fair warning: the source for some of these shows is not always the best, as will become pretty immediately apparent, but I’ve done what I can to find the best available copy.

First up, here’s a show that up until a few years ago I was unaware that it even existed. It has quickly, however, become an absolute favorite for reasons which should quickly become apparent. Your mileage may, however, vary:

What Halloween would be complete without a visit from the late, great Vincent Price? Here he is on The Muppet Show.

Of course, we all know How the Grinch Stole Christmas, but were you aware that Halloween is Grinch Night?

Here’s one of those Halloween-themed episodes I mentioned, from Happy Days:

The Beverly Hillbillies get in on the fun with an episode from Season 7: The Ghost of Clampett Castle:

This may not necessarily be Halloween themed, but any excuse to watch an episode of Lights Out is good with me:

And the same is true for One Step Beyond

Sometimes all you need to know is the title, and this one is from 1972 (as it really would have to be): Daffy Duck and Porky Pig Meet the Groovie Goolies

Tales of Tomorrow presents a live version of Frankenstein from 1952 which stars Lon Chaney Jr. According to TV legend, Mr. Chaney thought this was a rehearsal instead of a broadcast, which explains some of his odd behavior. Of course, other explanations have also been forwarded, but we’ll just go with that one:

Of course, The Monkees had to get in on the fun

And finally, does it get any more classic than The Lucy Show? Let’s wrap things up with an episode entitled “Lucy and the Monsters”

So how about you? What TV shows do you like to watch around Halloween? Any favorite specials? Let me know in the comments below.