If you imagine a Quentin Tarantino movie yanked through the kind of Chinese film-making filter that gave us some of the more off-kilter Shaw Brothers movies then add on a layer of Godfather-wannabe Japanese Yakuza film stylings, toss some Three Stooges slapstick on top and finally drench the entire thing with a lot of mostly CGI blood, you might come somewhere close to Sion Sono‘s Why Don’t You Play In Hell?

But you’d still only be close.

If you read the above and think “Sounds like kind of a hot mess of a movie”, then I have to admit that yeah, it is. But it’s also quite a fun mess.

I could probably spend as long trying to outline the plot of the film to you as it takes to watch it, and even then I’d probably be doing both you and the movie a disservice, because the plot here is certainly not wholly irrelevant, but definitely secondary to the tone of the thing which -beyond what I wrote in the opening paragraph – I suspect is impossible to convey through writing. This is one of those movies akin to Hausu or The Room that really has to be experienced rather than described, and preferably experienced in a theater full of people who are there ready to simply go along for the ride and have a good time, and like those two movies, I predict that WDYPIH is going to have quite the afterlife on the midnight movie circuit.

At least I hope I’m right on that, because it’s certainly a film that deserves a chance to be found by a core audience of cult-movie followers rather than to simply wind up on a few shelves and be largely forgotten in the long run.

For those of you still sitting there reading this instead of simply rushing to your nearest arthouse cinema – if you’re lucky enough to have one like the Belcourt Theater here in Nashville where the film is getting a weekend-long run – to see it for yourself and asking “Okay, but really, what’s it about?’, I’ll give you Drafthouse Film’s official plot synopsis:

There’s a war going on, but that won’t stop the inexperienced but eager wannabe film crew The F@ck Bombers from following their dreams of making the ultimate action epic. Ten years ago, yakuza mid-boss Ikegami led an assault against rival don Muto. Now, on the eve of his revenge, all Muto wants to do is complete his masterpiece, a feature film with his daughter in the starring role, before his wife is released from prison. And The F@ck Bombers are standing by with the chance of a lifetime: to film a real, live yakuza battle to the death…on 35mm! 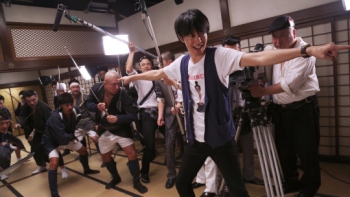 Okay, yeah, sure, as a straightforward plot description that fits the bill as well as anything, and tells you just enough going in that you may not get lost as to what is going on, but it does absolutely nothing to convey either the tone of the flick or the sensory assault of the images that it brings to the screen.

It doesn’t mention the spectacular slide that an eight-year-old makes through a blood-flooded (seriously, the blood here appears to be somewhere around a couple of inches deep) living room into a kitchen filled with mostly dead yakuza (don’t worry, she’s not traumatized by this slide, and it’s later revealed that she goes on to entertain the only mobster left living in the kitchen with a cute little dance accompanied by the singing of the jingle for the tooothpaste commercial she has made.

It doesn’t mention the possibly Exorcist-green-pea-soup-inspired vomit torrent that reveals a message from the movie gods.

It doesn’t mention the psychedelic cocaine-induced vision which transforms the mob boss’s daughter’s slicing and dicing of multiple foes into a rainbow of color amidst a field of flowers.

(Nor, for that matter, does it mention her subsequent decimation of ten mobsters who have surrounded her with one balletic swoosh of her sword.)

It doesn’t mention… well, let’s just say there’s an awful lot of images that it doesn’t mention and that I won’t either, because they really should be left as surprises for the viewer.

Nor does it mention another aspect of this film that is central to it, and that keeps all of the outre imagery from being purely weirdness for weirdness’ sake.

It doesn’t mention that in the end, this is a movie about love.

Yeah, you read that right… at its core this movie is a love story. Love, passion, and the way that they can turn to obsession, are really what drives everything else in this movie.

It’s love for her husband and child that drives Muto’s wife to spend ten years in prison when she easily could have escaped. It’s love that motivates the gang boss to pull out all the stops to complete his film in the ten days that remain before his wife is released. It’s a passion for film making that keeps the F@ck Brothers together for ten years and ultimately drives them to team up with the gang bosses to get their film made. Its his obsession with Muto’s daughter Mitsuko that causes the rival gang boss to agree to participate in Muto’s movie.

And it’s an obvious love for cinema that has driven Sion Sono himself to make this film in the first place.

No, Why Don’t You Play In Hell? is not a film for everyone. As a matter of fact, if you’re the kind of person who really only wants to see the latest multiplex blockbuster or chick flick or even low-key indy film, I’d advise you to simply stay away and not waste your time or money because you’re probably not going to like this film. If, on the other hand, you’re of the more adventurous sort who wants something different, who has, yes, a love for the strange and more out-there fare that usually has to be sought out and comes along every so often, then I predict that you, too will find the fun that’s to be had from a little playtime in hell.