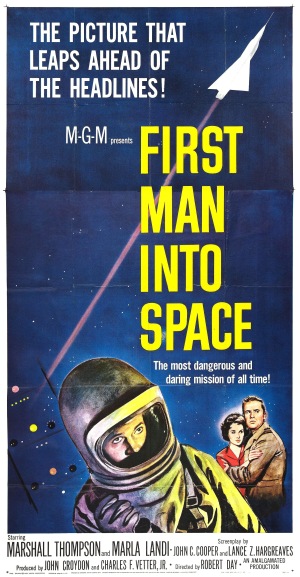 Consider this a follow-up to yesterday’s QR of The Atomic Submarine.

Obviously, someone at Criterion decided it was time to give sci-fi flicks from 1959 a little love, since this was spine #365 and TAS was #366. Actually, these were released both separately, and as part of a four disk box set under the heading of “Monsters and Madmen”, which also included the 1958 and 1959 Boris Karloff features The Haunted Strangler and Corridors of Blood. As I noted in the previous review, not exactly the kind of titles that immediately come to mind when one thinks of the collection, but in reality they are a good indication of the series’ diversity and why I enjoy exploring it so much.

Anyway, on to First Man into Space. Actually I am starting to see perhaps why these movies were the ones chosen for the collection. They may not be the most famous examples of sci-fi movies from the time period, but in a lot of ways they are perfect distillations of the things that I love about those films.

The premise is simple. Lieutenant Dan Prescott is a test pilot for the military who, though being the best there is at his job is also a risk taker who is known for taking too many chances with the experimental rocket planes he is given charge of. This is shown early in the movie when he takes the Y-12 roket he is piloting far beyond its guidelines and ignores commands to turn it around when he should. Then, upon landing, instead of heading straight for a military debriefing as he should, he rushes straight to his girlfriend’s house to spend time with her.

Even so, because he really is the best man for the job, and over the objections of his brother, Commander Charles “Chuck” Prescott, who is also one of his superiors, when it comes time for the military to test its next experimental rocket, the Y-13, Dan is selected to pilot it also. This time, the rocket is so powerful that he seizes the opportunity  to climb as high as he can and reaches an altitude of 250 miles, thus qualifying him as the first man to reach outer space, something he has dreamed of all his life. Unfortunately, this also causes him to pass through a mysterious cloud which seems to be composed of some type of meteoric dust and cosmic radiation which… well, I think I’ll stop there, rather than spoil the fun for those who might want to see the flick for themselves.

Again, this is far from a perfect movie, and it certainly can’t compete with some of the much higher-budgeted movies of it’s time, but it makes the most of what it has. Actually, while watching it, I was reminded of some of the best episodes of the television series The Outer Limits, which often dealt with similar premises, and often focused on many of the same themes that this movie does. It also does this with just the right amount of not taking itself too seriously and simply reveling in being pure B-movie entertainment, as evidenced by the (unintentionally?) punny newspaper headline seen at the left.

In the end, I suppose, it once again comes down to whether you are a fan of 50s horror and sci-fi movies. If you are, then I highly recommend it. And even if you’re not, and are just looking for a good little don’t-expect-too-much-from-it way to pass a couple of hours on say the kind of cold and snowy afternoon or evening like we’ve been having here in Nashville for the past week or so, this is not a bad way to do it.