Last week I spent some time writing about the Muppets on Sesame Street, along with a follow-up post featuring some of the Muppets’ original commercial appearances, so it seemed like this would be a good time to take a quick look at the original Muppet Show, especially with a new version on the way.

Again, I have to express my surprise at the fact that so many of my younger co-workers and readers seem unfamiliar with the fact that a version of The Muppet Show existed before the movies, but also again, I suppose it shouldn’t be that much of a surprise since so many of them weren’t even born when the show was originally on the air, and, since the show featured so much popular music from the day, it hasn’t had a really good official DVD or Blu-ray release (at least not in the US), nor is it often rebroadcast. 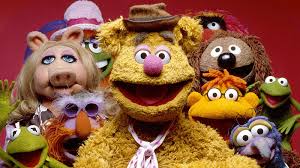 On the bright side, though, it does appear that most of the full episodes are available on YouTube complete with introductions from Jim Henon’s son, though they have to be viewed in a small window surrounded by a huge blue screen adorned with the Muppet Show logo. Definitely not an ideal way to watch them, but better, I suppose, than nothing for those who want to seek them out.

Anyway, as I noted last time, the Muppets had been a fixture on Sesame Street since 1969, but by 1974 Jim Henson was beginning to feel constrained just working on that show, and was also concerned that his creations were going to be associated solely with children’s programming, so he began to try to figure out something new that he could either with some of his previously created characters, or with some new ones. These concerns led him to create two Muppet specials – The Muppet Valentine Show, and The Muppet Show: Sex and Violence – both of which aired on ABC. Unfortunately, these did not lead to a series pickup, though they did prompt CBS to tell Henson that they would be interested perhaps in syndicating a show to their local affiliates for airing during the 7:30 to 8pm (Eastern Time) time slot.

Henson was reluctant to go the syndication route, and it looked like his dream for a separate Muppet Show might go unfulfilled until rescue came from a very unexpected source. Lew Grade, who was the head of the British television station ATV (which was a commercial station and part of the ITV network, as opposed to the more familiar BBC) offered a deal which would see The Muppet Show produced by ATV in the Elstree Studios in England, and first broadcast there, then sold into syndication in America by ITC entertainment, ITV’s distribution arm. 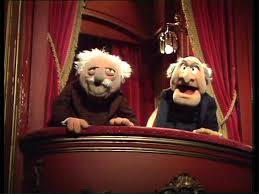 Anyway, this version of The Muppet Show is both a variety show of the type that was popular at the time, featuring comedy skits, guest stars, and songs, and a throwback to the vaudeville days when such shows were performed on the stage rather than on television. It could also be considered a sort of sit-com, since much of the show was also concerned with showing the backstage shenanigans and interactions between the characters and just what went on in the putting together of the (fictional on-stage) show each week.

It was in this show that we first met such Muppet staple characters as Miss Piggy, Fozzy Bear, The Swedish Chef, Dr. Bunsen Honeydew and his assistant Beaker, and many others. And of course, they were all overseen by the ever-present Kermit, who served both as host of the show and show-runner, responsible not only for attempting to keep these disparate characters in check and making sure that the show went on, but also with seeing to the comfort and care of that week’s guest star.

It should also be noted that though at first many big-name stars were reluctant to make the required trip to England to appear on the show, once its popularity soared, it became one of the go-to shows and the stars were virtually clamoring to book an appearance.

Okay, as I noted above, I’m just not that thrilled with the way that the full shows are presented on YouTube, so rather than embed one of those here, I am instead gonna just post a few short bits and clips from the show to give you an idea of what was going on and some of the performers who appeared on the show.

Oh, and just for good measure, here’s a short compilation of scenes from that second pilot, Sex and Violence, for those who are curious as to what Henson had in mind for a bit more “adult” show: