During the Cold War, a secret Soviet project created a group of Superheroes. Each of the heroes was meant to represent a different nationality of the USSR and the strengths and traditions of those people. However, with the end of the cold war and the Union on the verge of collapse, it is time for these heroes to come out of hiding and join together against not only threats both internal and eternal, but also supernatural.

That’s the premise of the upcoming Russian superhero movie Zaschitniki – the literal Russian translation is apparently The Defenders, but of course with Marvel/Netflix coming out with their own version of that title next year, that wasn’t going to fly, so for now at least, it’s being referred to in English as Guardians.

That’s right, it’s a Russian superhero movie! And from where I sit, looking at the trailer and a couple of short clips, it looks really good and has quickly flown to the top of my list of most anticipated films of next year. Of course, that’s assuming that we’ll get a chance to actually see it here in the states.

So who are these heroes? Well according to Wikipedia, they include: 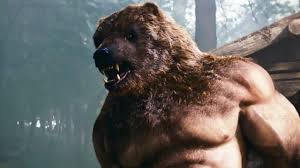 Arsus -A type of berserker or werebear, [who] has the ability to transform himself into a large bear, though he can control how much of his body is transformed and can transform partially if he wills it. This transformation ability can allow him to seamlessly alter his size, bulk and musculature and transform himself into a burly humanoid, as well as use his transformations to physically augment himself. He has multiple phases of transformation due to his ability to partially transform. He is armed with minigun in battle, which he carries on his back when fully transformed. He can also use his inhuman physicality to fight, especially when he is full bear form. Desperate, loyal and determined, he is known for his drive to “break the enemy into small pieces”. 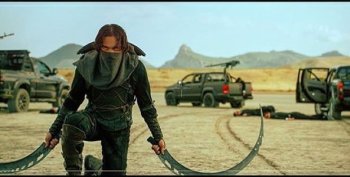 Khan – Masterfully skilled with all kinds of blades, as well as with many kinds of martial arts. Along with other blades, he is primarily armed with twin, crescent like blades, each of which resemble a scimitar, scythe or sickle and can be joined at the hilts to form a double bladed weapon. The strong blades, with enough force, can slice through entire cars without going blunt or being damaged. He is also physically augmented, possessing a degree of superhuman strength that allows him to smash through brick walls with a single punch and send men flying through the air with his attacks, as well as superhuman mobility that gives him acrobatic and gymnastic capabilities and the ability to effortlessly dodge and evade attacks, even gunfire at point blank range. He also possesses inhuman speed, enough that he almost appears to teleport. Using his speed requires him first to focus hard, achieving a meditative state that causes his eyes to turn completely white and allowing him to perceive faster than any human can. While in this state, he sees everything as being in slow motion while he himself moves at normal speed, or somewhat faster. Whenever he moves in this state, a black gaseous trail appears behind him outlining his movements. His strength and speed allows him to use his strong blades to slice a car and anyone in it in two.

Ler – He is armed with all forms of earth manipulation abilities, and is able to control stone and soil, collect dust from boulders, stop falling rocks, and move mountains. He can cause the ground to break apart under his enemies feet with great precision in what parts break and what shape the subsequent depression makes. This allows him to form instant craters, canyons, ravines, and sink holes to fight his opponents, though these formations are usually small in scale. Being able to cause quakes and tremors in the ground beneath his opponents, such as making the ground under them erupt and explode. Along with his abilities, he is armed with a small chain with a large rock cemented on its end, which he can use as a type of flail.

Xenia – Flexible and agile, to a superhuman degree. She has the ability to move on water as if it were solid ground, as well as to seamlessly floating through it. This gives her higher mobility in water than the fastest, or most maneuverable sea creature. She cannot feel temperature differences and can survive in an airless vacuum, which allows her to survive underwater without any negative effects. She can also transform her body into clear, water like liquid and use it defensively or offensively. This ability allows her to become gelatinous and vicious, allowing her to flow like liquid and physical touch and interact at the same time.

Guardians is scheduled fr a February 2017 release in Russia. No word yet at least not that I’ve seen) on a US release, but I’m hopeful it won’t be long after.

and here’s a teaser showing Khan in action: