The first time I watched the 1971 Charlton Heston-starring The Omega Man I actually didn’t.

Okay, in order for me to explain that statement, I’m going to have to take you back in time a bit, to when I was much younger, when we only had a few television channels, no VCRs or DVRs or even DVDs, and yes, dinosaurs did roam the Earth.

At that point, when a movie came on TV, you basically had two options: either watch it as it was being broadcast, or miss it completely and hope that it would be shown again at some unknown future date. There was no “Well, if I don’t watch it now I can always get it on Amazon or download it or stream it on Netflix.”

That’s also why in my house, as well as in most American homes, the TV Guide was the most-read magazine. As a matter of fact, at that point it was the best-selling magazine in America. And in my house, especially for a sci-fi/horror movie loving kid like myself, it was a true treasure to be pored over each week when it came in, to see what genre movies were coming on and which ones I was going to try to see.

Oh, and let me just add: woe forbid if two or more of those movies overlapped, or if they overlapped with a favorite regular TV show, because than a real choice had to be made. 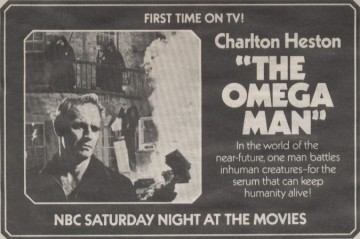 And it was even worse if something you wanted to watch conflicted with something your parents wanted to see, because it was obvious who was going to win that little fight. Actually, there wasn’t really going to be a fight. (Oh, yeah, one other thing I forgot to mention earlier about this time: there was also no such thing as watching something you wanted to on a computer or iPad or phone or whatever. Remember, we’re talking about a time before home computers or the internet. Yeah, I know, it’s a wonder we were able to survive.)

Anyway, it was under such circumstances that I first came into contact with The Omega Man.

The Omega Man is actually the second of three major adaptations of Richard Matheson’s 1954 novel I Am Legend. The first was 1964’s The Last Man on Earth which starred Vincent Price. The third was 2007’s I Am Legend which had Will Smith in the lead role.

Though each of them varies to a larger or smaller degree from Matheson’s novel, they all share the same basic set-up. In The Omega Man the concept is simple. Robert Neville, who was both a Colonel in the U.S. Army and a doctor who studied rare diseases is seemingly the lone human survivor after a biological war between Russia and China sets off a plague which kills off most of the world’s population and turns most of the “survivors” into plague ridden zombies.

Anyway, back to the story I was telling:

At the same time as I was a young sci-fi/horror movie fan, I was also a fan of the early pulp characters such as The Shadow and Doc Savage. I had become a fan of these characters through a series of paperbacks that were being released at the time which reprinted those early pulp stories, and which the local library would sporadically get in.

Again, finding a new one of these paperbacks on the library shelves was like a gold miner finding an unexpectedly large nugget.

You can, therefore, imagine my pleasure when, on a certain Saturday afternoon I just happened to run across a new oc Savage reprint at the library. I couldn’t wait to get home and dive right into it.

Of course, as luck would have it, that was the same Saturday that NBC was going to be premiering The Omega Man. What a terrible choice to have to make. A known good in the Doc Savage book, or the possibility of something new and interesting in The Omega Man?

So, while I was holed up in my room reading the latest (well, to me at least – hey, if you’ve never read it it might as well be a new book, right?) adventures of doc and his companions, my dad was in the living room checking out the Chuck Heston flick.

Still every once in awhile, the sounds coming from the other room were just intriguing enough to draw me in to take a peek at what was going on. Of course I really had no idea what was happening, but I did see was enough to make me curious. Especially when I happened to pop in on the rather iconic final shot. But hey, if you aren’t familiar with that shot, I’ll just have to tell you what my dad told me when I asked him what was going on: if you want to know, you’ll just have to watch the movie sometime. 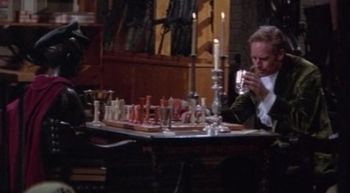 Fortunately, I eventually did.

I have to admit that I’ve always found Heston to be, if nothing else, an interesting actor, especially during this period of his career when he was making some very interesting choices as far as the movies he was in. The Agony and the Ecstasy, Planet of the Apes, Anthony and Cleopatra, Soylent Green, and the list goes on. For those who think of him today mostly as an NRA-loving reactionist, at the time, Heston was not just a highly respected and sought-after actor, but a man who made some interesting choices in the roles he sought out.

And this remains true when it comes to his choice to portray, and his interpretation of, Neville in this movie.

As the movie opens, Neville is a man alone. As far as he knows, he is the last human survivor of the plague, and he is also a man determined to stay that way – a survivor, that is. He spends his days hunting down zombies, collecting supplies, or watching the movie Woodstock in the local theater. (Apparently, that’s what was showing when the apocalypse hit and – since this is before the advent of the multiplex – it’s the only movie showing close to his home).

And of course, that’s also key – Neville must stay close to home, because he must be there by nightfall, barricaded into his abode when the zombies emerge. Led by Johnathan Matthias – once Neville’s friend – “The Family” –  as the local cult is known – are eager to get to Neville an make him just like them.

By the way, one interesting choice the producers made as far as the “Family” goes is that they are distinguishable from humans because they are all now albino, and extremely sun-sensitive. This explains their nocturnal vampire-like tendencies, while still allowing them to be killed by regular bullets, rather than having to be staked, giving Heston a chance to be a bit more of an action-hero than Price could be when her portrayed the role. Of course, the distinction also suits their different personalities and acting styles.

The Omega Man is definitely a triumph of atmosphere, as it does a good job of portraying the day-to-day activities of Neville as he lives his solitary life, though it also has its completely over the top moments, such as Neville playing a solitary game of chess against a bust of General MacArthur.

Anyway, I don’t think it’s giving away too much to state that eventually Neville finds out that he may not actually be the only human left alive, Of course this only brings in more complications partly because he has lost any real ability to relate to other actual people and because it raises the question of whether there might be some way to actually save the human race.

I’m giving The Omega Man a very high recommendation here, especially for those of you who are fans of 70s sci-fi adventure movies. No, it’s not perfect, and it’s not really that representative of Matheson’s novella, but nonetheless, it’s well worth a watch.

Now if we could just get a decent Doc Savage movie.