Once again we continue our journey through the Sight and Sound Top 250 Movies of All Time list, we come to #246 Fritz Lang’s The Testament of Dr. Mabuse. And as always I’ll note that for those just joining us, you can find a full introduction to what the Sight and Sound Top 250 list is, and a look at the complete list of the movies on it, along with links to the ones I’ve already written about here. And, if you want to be sure not to miss any of these posts, just head on over to the Facebook page and give it a “like”or follow me on Twitter (both of those links are also in the sidebar) where I post anytime one of these – or anything else on the blog, along with just random other links and thoughts that may not make it into full posts – goes up. Trust me, if you’re not following one or the other (or both), you’re not getting the full Durmoose Movies experience.

From the silent era on, Fritz Lang has been one of Germany’s most celebrated and interesting film makers. Most film fans likely know him for his ingenious silent science fiction epic Metropolis, or from his classic Peter Lorre-starring noir M.

One of Lang’s lesser known, but no less ingenious works is his second sound film (M being his first), The Testament of Dr. Mabuse.

The movie is actually a direct sequel to an earlier silent film of Lang’s, 1922’s Dr. Mabuse the  Gambler. Running a total of roughly four and a half hours an released in two parts,the earlier film introduces the character of Dr. Mabuse, a criminal mastermind, doctor of psychology, and master of disguise, who has powers of hypnosis and mind control and is in control of the counterfeiting and gambling rackets of the Berlin underworld. The character was taken from a series of novels written by Norbert Jacques.

At the end of the earlier movie, Mabuse was confronted by the ghosts of his victims, and driven insane. As Testament opens, the evil doctor is still locked away in the insane asylum to which he was taken.

The film opens in a noisy print shop where we find disgraced police detective Hofmeister attempting to uncover a criminal conspiracy. After a shoot out with the criminal gang, Hofmeister escapes and calls his former boss, Inspector Lohmann. While he is attempting to explain what he has discovered, Hofmeister’s home is broken into and after shots are exchanged, the detective disappears, only to later turn up in the same asylum as Mabuse, somehow driven inexplicably insane.

We then cut to a lecture hall where Professor Baum is teaching his class about the case of Dr. Mabuse, thus giving us, the audience a quick recap of previous events and a succinct introduction to the character. Ten years have passed since the events of The Gambler, and Mabuse has spent most of that time in a near catatonic state sitting bolt upright upon his be. At first, Mabuse didn’t move at all, but then the doctors noticed his hands beginning to twitch and eventually they noticed he seemed to be writing in mid air. Finally given  pencil and paper, Mabuse began scribbling, until words began to form, then sentences, then eventually entire treatises, mostly having to do with ways to continue his criminal empire to eventually institute what he comes to call “The Reign of Crime”.

Interestingly, it seems that despite the mad doctor’s incarceration, his criminal gang is still active and is still carrying out crimes just as outlined in Mabuse’s writings, a fact noticed by Baum’s colleague, Dr. Kramm when he stumbles upon pages of Mabuse’s writing which he inadvertently knocks from Baum’s desk.

We eventually find that not only is Mabuse’s criminal gang still active, they appear to still be receiving orders from the criminal mastermind. From behind a curtain in their hideout, Mabuse’s voice instructs them in each step of his evil scene. Unfortunately for Dr. Kramm, part of those instructions include his murder. 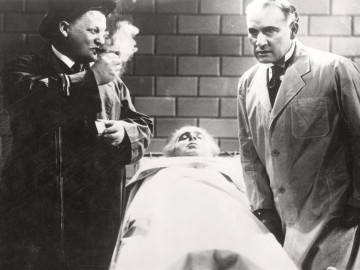 Meanwhile, Inspector Lohmann has become suspicious that Mabuse may somehow be connected to the crime which is running rampant through the city, so he goes to the asylum to see what he can perhaps learn from the doctors or even from Mabuse himself. However, upon arriving, Lohmann is informed that Mabuse died earlier that very morning. Lohmann is shown the body and is assured that Mabuse is not only certainly dead but that there is no way that the body can be any other than that of the doctor.

Still, the crimes continue, and the criminals still seem to be receiving their orders from the unseen doctor. Moreover, as Dr. Baum seems to become more and more obsessed with Mabuse’s writings, he suddenly sees a horrifying  apparition of the dead man who sits across the desk from him and explains his theory of, and plan for, the reign of crime. We then see Maabuse’s spirit rise from the chair, give the psychologist more papers, then seemingly inhabit his body.

From this point on, all bets are off as the crime spree continues and the increasingly harried police inspector does his best to figure out exactly what is going on and who can possibly be the master of the criminal gang.

There are many aspects of The Testament of Dr. Mabuse that keep it from being simply a run of the mill crime thriller. The first, and obviously most important is Lang himself and the German film making sensibilities he brought to the work. No, this is not the Expressionism of something like The Cabinet of Dr Caligari, but there is still a certain atmosphere to the movie that speaks of a similar flavor.

Also, there is the possible supernatural aspect that suffuses the film. I say “possible”, because even though we see what seems to be Mabuse’s ghost confronting Dr. Baum and perhaps even possessing him, the option is also there that these events are taking place only in Baum’s increasingly fevered imagination. As a matter of fact, Lang later stated that one thing he wished he had left out of the film was that touch of the supernatural. Without that, however, the film would be missing a touch of genius.

Lang would return to the world of Dr. Mabuse one more time in his career, for his final film, 1960’s The Thousand Eyes of Dr. Mabuse. I’ve yet to see that film, but considering Lang and the skill and imagination he brings to all of his films, it’s one I’m very much looking forward to catching up with.

I couln’t find a properly embeddable English-language trailer, so instead here’s a short clip of Baum studying Mabuse’s notes which gives an excellent feel for the atmosphere and tension of the film.