The short intro: For those who are unfamiliar with the concept, Old Time Radio is the phrase generally used to refer to the time when radio was (mostly) live, and was full of a variety of different shows, as opposed to simply being a means for record labels to use robots to promote the top records of the day. OTR  Tuesday is my chance to explore some of those old radio shows, their connections (both old and new) to movies, and hopefully to encourage some of the rest of you to take a look at a probably unfamiliar source of entertainment that I truly love. If you want more info on OTR, and some examples of the variety of shows that were made, be sure to check out this introductory post.

A bit of a cheat, I suppose you could say this week, as we step out of the “Golden Age of Radio” for a slightly more modern take on things. But only slightly.. We’ll get even more modern from time to time, but for now we’re sticking to the 1970s. 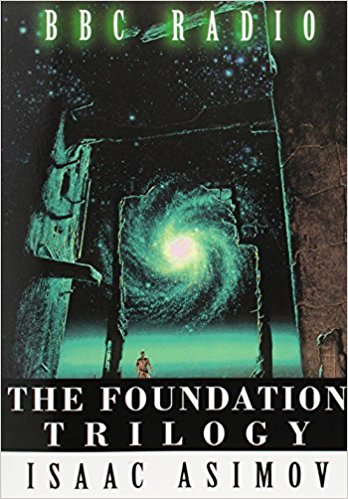 One interesting thing that many Americans may be unfortunately unaware of is that though radio drama for the most part died out in the 60s in the U.S. (I say “for the most part, because it has popped up again here and there, most notably with the CBS Mystery Theater in the late 70s an early eighties which I covered in an earlier series of posts here, here, and here and the Sears Radio Theater, which we’ll get to eventually), it’s a form that is still going… well, perhaps “strong” is a bit of an overstatement, but going, anyway, in many other parts of the world, and especially in Britain, where it is still a mainstay of the BBC radio system.

Anyway, back in 1973 the BBC took on the ambitious project of adapting Isaac Asimov’s classic Foundation Trilogy.

For those who may not know the trilogy, it first began life as a series of short stories written by Asimov for Astounding magazine between 1942 and 1950. The sshort stories, along with a new one were collected in a series of three books by Gnome Press in 1951 as Foundation, Foundation and Empire, and Second Foundation. For many years, Asimov considered the stories completed until in 1981 he was persuaded by his publisher to add a couple of new novels to the canon.

The main thrust of the trilogy is that the old Galactic Empire is dying, and unless something is done, there will be a 30.000 year interregnum during which mankind will fall into a new dark age. Enter Hari Seldon, who has developed a new type of mathematics. known as psychohistory, which, through its ability to predict the future, at least in broad strokes, brings with it a hope of shortening that time to only 1.000 years and of preserving much of human history and knowledge through that period.

In order to bring about this fortuitous series of events, Seldon establishes a group of scientists and encyclopedists  known as The Foundation who will be responsible not only for preserving the wealth of human knowledge, but for guiding mankind though its darkest times and establishing the new empire which will be humanity’s crowning achievement.

The trilogy is the story, then, of the death of the old empire and the birth of a new one, and the struggles of the Foundation to make all of this happen. It is also the story of people, of individuals, and their struggles not only with doing the right thing for all of humanity, but determining just what that “right thing” might be.

I said at the first that adapting the Foundation Trilogy in any form, but especially for radio, is an ambitious project, especially since it is even harder to convey the scope and the glorious vistas of this type of space adventure without the visuals that film or television could bring or the in depth descriptions that are possible on the printed page. And, to be honest, this BBC adaptation is something of a mixed bag at best. While it does lack some of the grandeur and while its limited running time does mean that a lot of the subtlety and intricacy of Asimov’s plotting must be jettisoned, it still works pretty well at at least capturing the spirit of the work.

I’m still holding out hope that perhaps one of the cable channels which are doing so much interesting television right now will see the value in the Foundation saga and invest enough to do the story the justice that it deserves, but for now, this radio adaptation is the best we’ve got.

It’s presented in eight parts, and you can listen to the entire story below. See what you think.