Between this blog and my previous one, Professor Damian’s Public Domain Treasure Chest, I’ve been writing about movies for quite a while now. Because of that, there are a lot of posts that have simply gotten lost to the mists of time. So, I figured I’d use the idea of “Throwback Thursday” to spotlight some of those older posts, re-presenting them pretty much exactly as they first appeared except for updating links where necessary or possible, and doing just a bit of re-formatting to help them fit better into the style of this blog. Hope you enjoy these looks back.

Thought we’d take another look back at a silent film from the Professor Damian days. 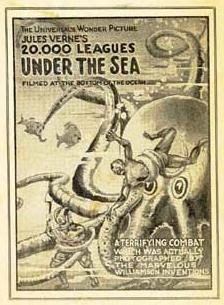 Way back in the day, when yours truly was but a young perfessor, one of my favorite movies was the 1954 Disney-produced version of Jules Verne’s classic tale 20,000 Leagues Under the Sea. Sure, from today’s historical and literary perspective it was horribly miscast, and much of the subtleties of Verne’s original characterizations is missing, but for a young lad there was nothing that could spark the imagination like the undersea adventures of the Nautilus and her crew. James Mason cast an imposing regality as the imperious Captain Nemo, and when Kirk Douglas risked his life battling that giant octopus, well, to my young mind there was no match for his cleft-chinned heroics.

Imagine my delight, then, in discovering while researching the silent films to include in this mini-festival that there was a much earlier silent version of the tale that I could include here. Of course, almost as soon as I saw the opportunity, the questions also began to arise. Was there any way that such an early version could pull off the effects necessary to tell the story? At this point, filmmakers were only just exploring land based photography, how would they possibly pull off the underwater effects? And was there any way that it could bring the excitement and joy that the Disney version had to my young boy’s heart? And would it, being an adaptation much closer in time to the source material also be closer in details?

Well, I fear the answer is both “yes” and “no”. As far as the effects and underwater photography goes, there can truly be very few complaints. Both the poster seen above and the opening title cards credit the “Williamson Brothers” and their fantastic “inventions” for the actually quite incredible for the time underwater photography. According to Wikipedia, the secret of these “inventions” was not actual underwater cameras, but a series of tubes and mirrors that “allowed the camera to shoot reflected images of underwater scenes staged in shallow sunlit waters”. This technique allowed the filmmakers to capture some truly incredible shots of undersea life and of Nemo’s crew under water in what are actually fairly credible designs for early scuba suits, even though actual SCUBA gear wasn’t developed until 1939. 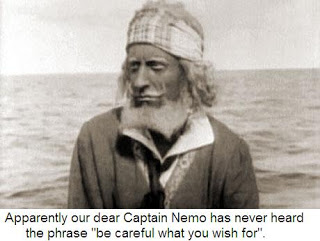 Unfortunately, once one gets beyond some of the amazing-for-it’s-time photography, one also has to look at the plot, and unfortunately, that is where the film really falls down. First of all, despite the title and an opening 10 minutes or so that are quite faithful to the original tale, the film for some reason soon twists and begins to incorporate ideas and plot-lines from Verne’s other Nemo novel, Mysterious Island. Instead of simply exploring the undersea world and the adventures of the Nautilus which would definitely give enough fodder for a film of this length, the viewer is also taken to an island not far away from the submarine’s current location where a balloon full of Union soldiers crashes, soon followed by the arrival of a yacht owned by a man named Charles Denver who turns out to be not only known to Nemo, but the man upon whom our glorious captain has been seeking revenge all these years.

Actually, it’s with Captain Nemo and this desire for revenge that the film really makes its most egregious errors. As soon as an intertitle card pops up saying “Captain Nemo reveals the tragic secret of his life, which Jules Verne never told.”, it’s obvious that not only is the movie going to merge the two Verne novels, it’s going to go beyond them in an attempt to create a backstory that is completely unnecessary and leads the film even further into directions it doesn’t need to go. One thing I must, however, give the filmmakers credit for is retaining Nemo’s national identity as an Eastern Indian.

So, in the end, this version of 20,000 Leagues, I must admit, will not replace the Mason/Douglas version in my heart, though it definitely should be seen if only for the admittedly quite good early effects and as an opportunity to see how early filmmakers overcame the technological obstacles of their day to create something new in this developing storytelling technique called “the movies”.

Here’s a “re-imagined” trailer that features some of the highlights of the film:

Until next time, Happy Treasure Hunting

Hope you enjoyed this blast from the past. And for a special bonus, be sure to check out this week’s Silent Sunday which will feature the full movie.