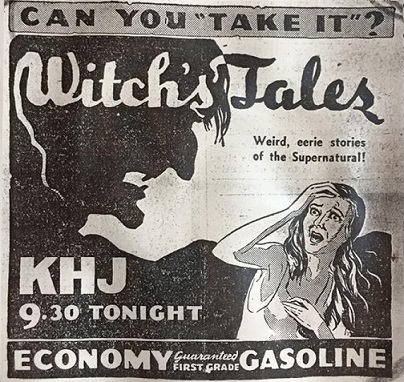 The short intro: For those who are unfamiliar with the concept, Old Time Radio is the phrase generally used to refer to the time when radio was (mostly) live, and was full of a variety of different shows, as opposed to simply being a means for record labels to use robots to promote the top records of the day. OTR  Tuesday is my chance to explore some of those old radio shows, their connections (both old and new) to movies, and hopefully to encourage some of the rest of you to take a look at a probably unfamiliar source of entertainment that I truly love. If you want more info on OTR, and some examples of the variety of shows that were made, be sure to check out this introductory post.

This week, in honor of the scary season, I thought we’d take a look back at some classic OTR horror.

One of the best things about the old radio shows was that they largely left the perception of what was happening to your imagination. Sure, there would be descriptions of horrific things, but unlike television or movies, in which the special effects are often limited by budget or other considerations, as long as you have an active and engaged mind while listening to these shows, pretty much anything is possible.

That’s a large part of why it is such an effective medium for horror. Take a ghost for instance. If someone in a radio show says they see a spectral figure, well, what that actually looks like is not dependent upon what the special effects team is able to come up with. Instead, if in your mind you simply see a figure covered in a sheet, then that is what is there. If, on the other hand, your mind conjures up a shambling, decaying corpse covered with worms and maggots, then that is what the people in the cast are confronting.

You, and your imagination, are the director and the special effects and makeup people.

Add to that evocative music and sound effects, and soon you have the possibility of an incredibly effective spook show right there in your living room. Or, to be more prcise, in your mind.

So here are just a few tales from this great medium. I suggest getting comfortable, turning out the lights, perhaps closing your eyes, and sitting back and letting the voices you are about to hear take you on a journey through the corridors of mystery and imagination. But be careful. You never know just what might be lurking around that next corner.