I’ve said it before: Gene Hackman is one of those actors who truly deserve more credit than they are usually given, and whose presence in a movie is usually enough to cause me to at least give it a chance. It’s certainly the sight of his name in the credits that caused me to give 1975’s Night Moves a look, and he definitely didn’t disappoint. Fortunately, the film has much more going for it than just Mr. Hackman.

At its heart, Night Moves truly fits into the tradition of the best films noir, despite its outwardly sunny settings of Los Angeles and the Florida Keys. Like the best examples of the genre, there is a certain sense of despair and inevitability to the proceedings that pervade every moment of what occurs onscreen. That’s not to say that the film is somehow gloomy, far from it, but there is definitely the feeling that no matter how hard Hackman’s character, private detective Harry Moseby might try, he simply cannot escape the doom that fate has in store for him, and in actuality he doesn’t really seem to be trying all that hard to escape as to simply accept and perhaps forestall what is coming long enough to perhaps at least save a few of the lives around him.

Director Arthur Penn – also known for 1967’s Bonnie and Clyde and 1970’s Little Big Man shows in this movie just how much he had his finger on the zeitgeist of the time, as the film he has crafted here fits well not only in his own personal oeuvre, but into the atmosphere that was pervading cinema in the mid 70s. Coming out of the Vietnam War, it seemed that everything was unsettled and that there was a sense of displacement, not just for retuning veterans who were struggling to find their place in the world they were retuning to, but in the nation as a whole which was reeling from and dealing with revelations of scandal and corruption that reached even the highest office in the land and left everyone with a feeling of distrust and questioning that made the time right for a film of just this sort.

Special note should also go to a very young Melanie Griffith – she was only 17 at the time the film was shot -who portrays Delilah “Delly” Grastner, whose disappearance from the mother’s home is the catalyst for everything that follows. Though young, Ms. Griffith shines in the role, showing not only the charm that would soon bring her much greater fame, while also not shying away from the racier aspects of the character. Also of note in the movie is James Woods who, though he had been acting in theater and on Broadway for quite a while at this point, was only really beginning his transition to the silver screen. 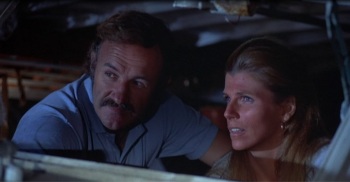 Earlier I noted that along with this movie fitting into the time that it is set, it also, for me at least, fits into the tradition of the films noir of the late 40s and early 50s, and while I know there are traditionalists who would debate my use of that term as outwardly the movie – since it takes place largely in the daytime, is in color, is not set in the heart of the big city – seems to defy many of the accepted conventions of the genre, my argument for describing it that way comes largely down to the atmosphere and tone of the film. Of course, it really doesn’t matter what tag you wish to put upon it, if you’re looking for good, suspenseful dark detective fiction, well played by its stars and well directed by Mr. Penn, then I think you’ll be well satisfied with this somewhat hidden dark gem.