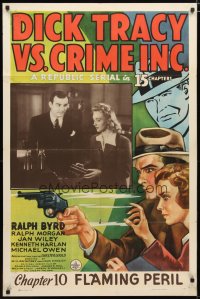 Okay, gang, it’s Saturday again, and time for another installment of Saturday Breakfast Serial and our ongoing chapter play, Dick Tracy vs Crime Inc. And, for those of you who may be just joining us, here are the previous posts for this serial: 1, 2, 3, 4,  5, 6, 7, 8, 9.

Last week we finished up our look at the serial film history of Republic Pictures, focusing on some of the features that distinguished their serials from those of their rivals. Today we’re going to begin a look at one of those competitors: Columbia Pictures.

Columbia Pictures actually began its life as CBC Film Sales corporation in 1918, and was named after its founders, brothers Harry and Jack Cohn, and Joe Brandt. In 1924, Brandt sold his stake in the company to Harry Cohn, and the brothers renamed the studio Columbia Pictures Corporation, partly in an attempt to shake off CBC’s reputation as a truly low-budget studio. 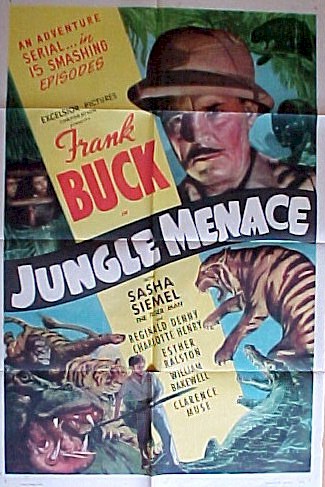 Because they couldn’t afford at the time to produce their own serials, the first serial to appear under the Columbia Pictures logo was Jungle Menace, which was actually produced by Louis Weiss in 1937. The Weiss brothers, Louis, Adolph, and Max had actually begun independently producing low budget movies in 1920, under a variety of names such as Superior Talking Films, Stage and Screen Productions, Artcraft Productions, Exploitation Pictures, Consolidated Pictures, and International Pictures Corporation.

Jungle Menace was created in the wake of the success of Republic Pictures’s 1936 serial Darkest Africa, which had starred real-life animal trainer Clyde Beatty. For their serial, Columbia hired animal collector Frank “Bring ‘Em Back Alive” Buck. The serial was set in the fictional land of Seemang in Asia, and Buck played the role of Frank Hardy, a soldier of fortune who intervenes in and investigates attempts to run a rubber plantation owner and his daughter off their land. Here’s a description of the filming of one of the scenes of Jungle Menace from the autobiography of director Harry L Fraser:

The snake was in no hurry. Slowly he slithered across the girl’s body, while she screamed and struggled. He turned, looking for a spot to slip under her to make his first wrap. I motioned to the reptile crew to get ready, and a split-second later gave them the signal to move in. But now, the maddened snake fought them and did its best to coil around one of the men. Before that happened, however, I had cut, and we had a good cliff-hanger with our terror-stricken heroine to close the episode.

Here’s how the resolution of that particular cliffhanger played out in the actual serial:

Jungle Menace turned out to be such a success for Columbia that they were immediately considered rightful competitors in the serial field with the other major players, Republic and Universal.

Ok, time to get on with this week’s chapter of  Dick Tracy vs Crime Inc. Here’s chapter 10, Flaming Peril:

Next time: Chapter 11: Seconds To Live, and we’ll take a look at more Columbia Pictures serials.