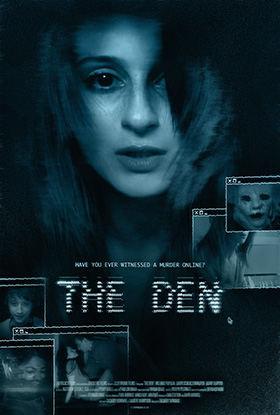 Horror has a long history of transforming the latest technology into terror. In the 50s, for instance, the atomic bomb and radiation was responsible for all kinds of mutations and critters. The 60s and 70s brought us malfunctioning computers trying to take over the world. In the 80s we got Videodrome and other films that focused on television and similar technology seen as intruding into our homes. Now there is a new technology that is fueling the modern media horror front: social media and the internet.

All of this makes sense, of course, since one of the most effective ways for horror movies to get under our skin is to make us confront those things which are in the public consciousness at the time, and today, when it seems like everyone is connected to some type of screen during their every waking hour, and there are all kinds of news and other stories about online stalking, cyber-bullying, sexting, and other forms of online “mischief”, very little is more on our minds than what can happen on the net.

The Den is a 2013 movie which follows Elizabeth Benton (Melanie Papalla), a grad student who is given a grant to study a Chat Roulette like site called The Den (thus the movie’s title) to see how many truly meaningful conversations she can have with the random strangers she meets on the site. Okay, it’s kind of a silly premise for a grant, but really it doesn’t matter that much since it’s really just an excuse to  get her involved with and really absorbed by the site.

Soon, Elizabeth is spending almost all of her time on the site, which annoys her boyfriend Damien who feels like she is ignoring him and worries her friends Jennie and Max.

We follow Elizabeth as she encounters various people online, some of her encounters are humorous, some relatively normal, some kind of scary. It’s not long, however, before strange things start happening – her computer starts turning itself on, filming her while she is unaware, and she begins receiving messages from and chatting with a girl whose camera is not working but seems to be in some kind of distress.

The mysterious stranger lets Elizabeth know that they spied on Elizabeth while she was having sex with her boyfriend and recorded it. The next time she is contacted by the stranger, their webcam suddenly turns on and Elizabeth sees a girl bound and gagged who is then brutally murdered before her eyes.

Terrified, Elizabeth takes the video to the police who tell her that there is nothing that that they can do. She then goes to her friend Max, a computer hacker, who insists that the video in probably faked, but agrees to try to help her track down the  source of the video.

Soon after, Elizabeth’s boyfriend Damien disappears and when she and the police go to investigate, they find his apartment completely cleaned out.and once again, she is told there’s no real evidence of a crime and their hands are tied. While she is busy with the police, her friend Jenni is tricked by someone pretending to be Elizabeth to go to Liz’s house where she is kidnapped by a masked intruder.

Further chaos ensues as Elizabeth is led down a terrifying road by the intruder in her life, but I don’t want to give away too much more of the plot because it is worth watching the movie to see all the twists and turns to come.

The big question, when it comes to a movie like this, which is largely about the style, with everything taking place on one or anther type of screen, is how well do the filmmakers carry off the conceit, and does it add to the film or distract from it. The purpose of an exercise like this, it would seem, is to enhance the immersion of the viewer in the experience of the movie and to increase the empathy of the viewer with the protagonist. Perhaps that seems a bit contradictory, since seeing everything through a screen might be seen as more of a distancing technique, but that is offset by the immediacy of the events,

On light of this, I have to say that The Den carries off this conceit very well. Though there are a few moments that ring slightly false, for the most part it does not have the sense of artificiality that plague many of these “found footage” films.

It also helps that Melanie Paplia, who plays Elizabeth, has a natural charm that helps draw the viewer in, even as her circumstances and the reactions of those around her – especially the police – strain credulity. That way, when things turn truly dire, we are invested in her plight and care what happens to her.