Something different for this week. 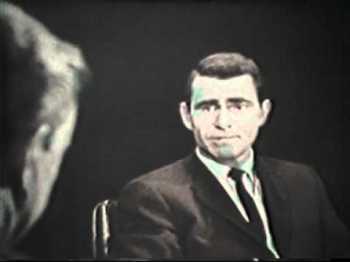 Among those “others” was Rod Serling, who at the time was only a week or so away from debuting a new show that he was writing, directing , and producing called The Twilight Zone. At this point in his life, Serling was well known as a television script writer, but he had also become increasingly frustrated with censorship by the networks and the increasing involvement of advertisers and their influence on what did and didn’t make it on the air. He is quite frank in this interview, and as always come across as not only extremely knowledgeable, but as a fairly harsh critic of the medium for which he had an obviously great love, but sincerely felt could be doing more than it was at the time. Serling also acknowledges his insecurity about leaving the medium either for Hollywood or Broadway.

Time, of course, has since vindicated Serling, at least as far as Twilight Zone was concerned, but at the same time, one has to wonder what Serling would make of the state of television today and whether he would even be given the chance to make the kind of impactful shows that he did back in the day.

Anyway, all of that just leads, ultimately, to meaningless speculation. So rather than go any further with that, I’ll just let you listen to and watch the man speak for himself.