A while back I posted a comment on Facebook about movies whose premise was basically undone by modern technology. One example that came to mind at the time was William Castle’s 1965 flick I Saw What You Did And I Know Who You Are. Based as it is on the anonymity of pre-cell phone land lines, and the phone pranks that those lines used to lend themselves to, in an age of ubiquitous Caller ID and the fact that not just land lines but even the phone books where the girls initially get their victims names, numbers, and addresses are now considered obsolete, the movie is pretty much a non-starter nowadays.

Anyway, when I posted that, I asked for other examples of movies that fit into that same mold – of course, there are many possible examples, not just in the realm of films, but television shows, also.simply in the way we view those things.

One of the biggest changes, one that started really with the advent of cable television and the shift to 24 hour programming is the television sign off.

You see, back in the day when most programming came from the networks and was fed to local stations – or perhaps those stations would be independent an depend on syndicated programming – it was generally accepted that there was a very small viewing audience in the wee hours of the late night or early morning. Therefore, the stations would “sign off” – usually somewhere between midnight an two a.m. – and after that would show only a test pattern such as the one at the right or might even go completely dark until they signed back on, usually somewhere around six a.m.

One of the most memorable ways that television stations would sign off was with a showing of a short film known as “High Flight”, based on a poem by John Gillespie Magee Jr.

The playing of the film would often be accompanied by a voice-over announcing the technical details of the station and that it would now “end it’s programming day.”

Magee was born in 1922 and was a pilot in the Royal Canadian Air Force who died in a mid-air collision over Lincolnshire in 1941. He was also a poet who won a prize for his poetry while still in middle school. Magee began the poem High Flight on August 18, 1941 and included it in a letter to his parents dated Sept 3, 1941. The poem gained most of its fame, however,  through the efforts of Archibald MacLeish, who was then the Librarian of Congress, and included it in an exhibition of poems called “Faith and Freedom” at the Library of Congress in February 1942. 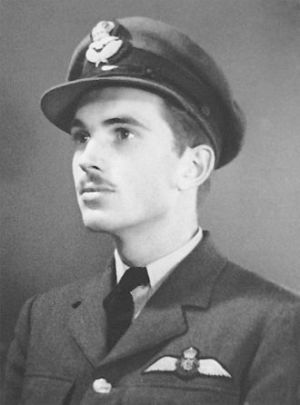 Oh! I have slipped the surly bonds of earth,
And danced the skies on laughter-silvered wings;
Sunward I’ve climbed, and joined the tumbling mirth
Of sun-split clouds, –and done a hundred things
You have not dreamed of –Wheeled and soared and swung
High in the sunlit silence. Hov’ring there
I’ve chased the shouting wind along, and flung
My eager craft through footless halls of air…
Up, up the long, delirious, burning blue
I’ve topped the wind-swept heights with easy grace
Where never lark or even eagle flew —
And, while with silent lifting mind I’ve trod
The high untrespassed sanctity of space,
Put out my hand, and touched the face of God.

It’s not entirely clear why station managers took to playing the short films base on the poem as their evening sign off, but as one who can remember seeing it from a very early age, I can say that it does serve well to set a contemplative and relaxed tone for preparations for sleep at the en of a long day.

There have been many variations of the film created over the years, often updated with more modern planes and technology. Here’s another version from 1972:

And with that, Durnmoose Movie Musings ends its own programming day. Or at least ends this post.

My Tweets
Join 222 other followers