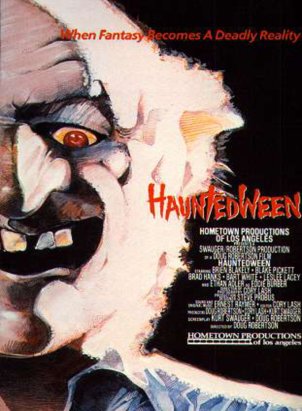 Okay, I’m just gonna be upfront here – there’s one main reason that I’m writing about this one, and it’s because I went to Western Kentucky University and was living in Bowling Green during the time this film was made, and I do know some of the people involved in it.

Yep, that’s right, this film, Hauntedween, is a product of the Bluegrass State which, I will readily admit, is not really that well known as a horror flick hotbed. At the same time, Bowling Green and Western did produce John Carpenter, so…

Bias declared, I’m gonna go ahead and say it, I kinda love this movie. Now, don’t misunderstand, this ain’t no Carpenter-level classic, but at the same time, it’s as entertaining as a lot of the low-budget slashers that flooded the market throughout the 80s.

The plot is fairly straightforward. A fraternity with money problems decides to throw a huge blowout party complete with a haunted house. While searching for a location, they are mysteriously given the keys to an abandoned house on the edge of town which, surprise! just happens to have been the site of a tragic murder years before. In an even more unexpected twist, the killer, who was a young boy when the original murder happened, has come back and intends to use the haunted house set-up as the background for a new killing spree.

And that set-up is part of what makes the movie so entertaining. As opposed to the typical slasher where the victims are picked off one by one (or maybe two at a time if they’re having sex) in secret, this killer is able to use the haunted house setting to take out his victims in full view of those who are passing by, because they believe it’s just part of the act. Therefore we get scenes where the victims are shouting “NO! You don’t understand! He’s really killing us!”, and the spectators are laughing and applauding the gory “effects”.

Speaking of the effects,this was, of course, made at a time when practical effects were still the norm, and although at times the budget does show and there are a few definite cheats, for the most part they are as effective as any that you’re going to see in this type of movie.

And that, I think, brings us to the most important part of this movie, and perhaps it’s best “special effect”, and that is one Brad Hanks. Now, again, I’m going to be honest with you folks, Hanks’ performance is kind of the “make it or break it” for this film. His performance is so broad that you’re either going to be completely charmed by him (as, admittedly, I am) or you’re going to be so completely turned off that it will sour the whole movie for you.

If any of this sounds like it’s up your alley, I really do suggest giving it a look. The entire movie can actually befound fairly easily online, and there is an official 20th anniversary dvd release including a commentary and behind the scenes documentary which is available here.

Okay, this is the point where I would usually give you a trailer for the movie, but since it’s impossible to find one online (and I honestly suspect one was never actually cut), instead, here;s the video for the theme song which includes some clips…